skip to main | skip to sidebar


There Is No, is exhibited in the Juvenile In Justice exhibition at the Crane Arts on view November 8 - December 12.

There Is No is a series of ninety-four paintings intended to address urban violence and the experience of loss. It began as a Mural Arts Program project called The Ninety-Four Effect which was based around a study that concluded that for every victim of urban homicide, ninety-four people are directly affected. Having lost a friend to homicide in 2005, I myself am one of those ninety-four, and so, in July 2012, I led workshops at the Covenant House, a shelter facility for homeless youth located in Kensington. With the input of the young people I worked with, and drawing from my own experience, I developed imagery and vocabulary that approximates the experience of devastation and loss. I made ninety-four paintings to represent the ninety-four people affected by one death. Each painting approaches the same subject from a different angle, so together it becomes recognizable, while remaining freshly and frustratingly elusive.

Click here to read my interview with the InLiquid Blog

Juvenile In Justice is curated by Julien Robson and Rachel Zimmerman and features the work of photographer Richard Ross and ceramicist Roberto Lugo and painter Mat Tomezsko, on view at the Crane Arts from November 8 to December 12, 2013. 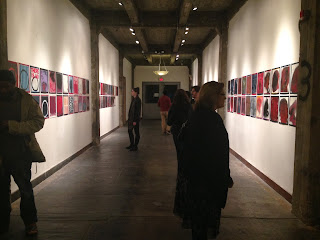 If you are interested in purchasing any piece from There Is No,
click here
A percentage of the proceeds will be donated to the Covenant House
and will help support the Youth Criminal Record Expungement Clinic on Dec. 3.
Posted by Mat Tomezsko at 9:54 AM No comments:

Mat Tomezsko
Mat Tomezsko is a Tyler School of Art graduate living and working in Philadelphia. His work has been exhibited at art spaces regionally and nationally including the Crane Arts, the Painted Bride, CFEVA, and Wexler Gallery, in Philadelphia, the DCCA in Wilmington, and Garcia Squared Contemporary in Kansas City, among others. Tomezsko has created several public art projects with the Mural Arts Program including There Is No, a series addressing urban violence included in the 2013 exhibition Juvenile In Justice with Richard Ross and Roberto Lugo; and Look Long and Look Good (2011), a survey of the history and people of Manayunk in 30 paintings currently installed along Main Street in Manayunk, Philadelphia. He is employed as a curator and preparator for InLiquid Art + Design.